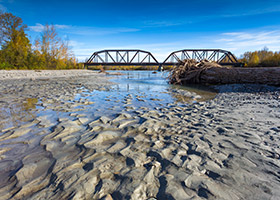 Awaken and inspire your sense of adventure as you sail north through Canada’s Inside Passage to Alaska along the same waterway frequented by prospectors and fortune-seekers more than a century ago. Your first stop is Ketchikan, a former last-stop mining supply outpost to Skagway-bound adventurers. Wander among the world’s largest totem pole collection and ponder contemporary dilemmas, like whether you want your Chinook salmon served sizzling on an aromatic cedar plank or cured next to an open alder wood fire. Whatever you decide, pair it with a side of sourdough bread and raise a glass of microbrew to the memory of the Klondike stampede. Admire the glaciated slopes and ice floes of Alaska’s Misty Fjords, Tracy and Endicott Arms and Kenai Fjords, but keep a weather eye on the horizon for the telltale spray and black fins of orca pods. Disembark in Seward and ride inland to Fairbanks and scenic Denali National Park. Caribou, foxes and Dall sheep observations are nearly certain, but even the locals grow excited about grizzly and wolf pack sightings. A detailed float along the Chena River provides additional opportunities for ursine encounters prior to your transfer to Fairbanks Airport and your reentry into the predictabilities of a less-adventurous modern civilization. • Cruise up the scenic Chena River in Fairbanks

• See the First Nations totems of Ketchikan, Petroglyph Beach in Wrangell and the jaw-dropping beauty of Tracy Arm

• Discover the only settlement of indigenous Tsimshians on Annette Island • 4 hotel stays – 1 night in Talkeetna, 2 nights in Denali and 1 night in Fairbanks

• All transfers to and from Denali

• Guided cruise on the scenic Chena River in Fairbanks

• Admission to the Anchorage Museum

• 11- or 12-day cruise from Vancouver to Seward
*Rates shown are per person, based on double occupancy, reflect all discounts and include non-discountable amounts. Taxes, Fees & Port Expenses are additional.